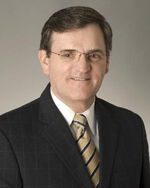 Rich joined Murphy Business & Financial Corporation in 2008 after completing a 32 year career in the financial services industry. Prior to his retirement, he served as Senior Vice President for a nationwide financial planning firm and was responsible for over 600 financial advisors and managers. He earned his Certified Financial Planner™ (CFP®) designation in 2006.

Prior to his financial planning career, Rich completed four years in the U.S. Air Force, during which he served as an Instructor Pilot.

Rich is a native of Albuquerque, New Mexico. He holds a bachelor’s degree in marketing from the University of New Mexico in Albuquerque. He and his wife Debbie were married in 1970 and have two grown sons Jason and Ryan. In his free time, Rich enjoys golf, skiing, bicycling and most of all, spending as much time as possible with their grandson, Aidan!