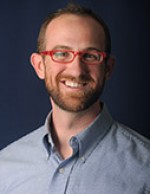 Josh owned his first business at the age of 16 – a pink ice cream truck. The proceeds from this endeavor helped pay for college. After finishing his B.A. in Music at DePaul University in Chicago, Josh spent two years as a full-time volunteer in Managua, Nicaragua.

Josh spent a lot of time around various family businesses growing up, and has a keen business sense. Coupled with his technological abilities, he is poised to take advantage of New Media for his clients. His Master’s degree from Loyola University Chicago is in spirituality, which has become a hobby that helps to inform his daily life.

Even though they grew up an hour apart, Josh didn’t meet his wife, Megan, until when they were both living in Nicaragua. They were married in 2012. She is a social worker providing mental health services to refugees in Southeast South Dakota. They love going for long rides on their bicycles.